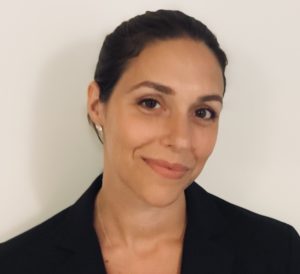 Catha Fischer has finally made it – to New Jersey.

The New York City born and raised reproductive endocrinologist has had her eye on this neck of the woods for years, and it has nothing to do with the shore.

Instead, it has everything to do with Reproductive Medicine Associates of New Jersey (RMANJ), and the experience she imagined she’d have here as an attending physician: the opportunity to conduct cutting edge research, work with a close knit community of doctors and learn from a mentor she’s respected for a long time: RMANJ founding partner Dr. Richard Scott.

After completing her fellowship in Reproductive Endocrinology and Infertility (REI) at Columbia University Medical Center in New York City, Dr. Fischer is coming to RMANJ as the clinic’s newest physician. She’ll start August 13 in Basking Ridge.

Needless to say, it’s been a long road to get here and Dr. Fischer is – well, she’s pretty excited.

“This is my dream job,” Dr. Fischer exclaimed recently. “I always wanted to end up here.”

“RMANJ is in an elite group of top tier clinics. It’s got high success rates, a rich commitment to research, the best doctors – coming here was a no brainer.”

Except for the fact Dr. Fischer has had to use her brain – a lot – to get to this point, and the journey to Basking Ridge has been a carefully-planned road that she’s been on since high school – and likely long before that, too.

Growing up on New York City’s Upper West Side, the daughter of two doctors – an anesthesiologist and an ophthalmologist – Dr. Fischer always saw her parents happy with their careers. They taught her that “work is not work if you like what you do,” and she developed an affinity toward medicine early on.

“My home was always really happy and my parents always came home from work with great stories and they felt accomplished and satisfied with their work,” she said. “That was something I realized early on – you only have one life, why not do your best to be happy and helpful to others?”

With that in mind, she enrolled at Washington University in St. Louis to pursue a pre-medicine track undergraduate degree and majored in women’s studies to balance her science heavy course load with an education in the humanities.

After graduation, she returned to New York City for a one year fellowship inside the surgery department at Memorial Sloan Kettering Cancer Center, where she had “a life changing experience” in 2007 that pushed her into reproductive endocrinology.

She joined a staff surgeon for a post-surgery consult with a patient (the surgeon invited her in to see what a positive consultation looked like after successful cancer surgery), and, after a celebratory discussion about the patient being cancer-free, the patient, barely containing her excitement, asked: “So when can I start having kids?”

The moment was heartbreaking because the surgeon – skilled, conscientious and well-respected – hadn’t thought of fertility preservation and hadn’t educated the patient about how chemotherapy and other cancer treatments could compromise her fertility. The room fell silent, and that moment, Dr. Fischer suddenly had a calling.

“It had just not crossed the surgeon’s mind, and I had this moment of thinking, ‘this is a huge institution and no one is thinking about this,” Dr. Fischer said. “That’s when I immediately decided to go into the field of infertility without knowing anything about it.”

She enrolled in medical school at Icahn School of Medicine at Mount Sinai in New York. After her third year, she decided to pursue an opportunity at the Yale School of Medicine in New Haven, Connecticut, as a research fellow in the REI division.

Most of the research she worked on dealt with figuring out which medications came closest to “treating” endometriosis (there is no definitive cure other than a total hysterectomy) without turning off the reproductive hormones.

“We tried to figure out what medications could lessen symptoms without causing menopause, which is a best of both worlds situation,” she said, “and a lot of the drugs we tested are on the market now.”

Her experience in New Haven was so positive that she decided to do her OB/GYN residency at Yale New Haven Hospital. One year before graduation, in 2015, she began applying for fellowship, casting a wide net to see what program would fit her career ambitions best.

“I interviewed at RMANJ for the fellowship and I fell in love,” Dr. Fischer said.

But because her husband wanted to be in New York City – he had followed her to New Haven, after all – RMANJ seemed like an impossibility for her. “But I never forgot about RMANJ, and I always knew I’d have to get here.”

She matched into fellowship at Columbia University Medical Center and dove into exciting research about mitochondrial disease and fertility. She studied how to strip a woman’s egg of the problematic DNA, wrap it with the healthy DNA of another woman, and create an embryo free from disease. She practiced this procedure on mice and human embryos, although those have not been transferred because the science is still developing.

“This is a conversation that will only get louder in the coming years,” Dr. Fischer said. “This is the tip of the iceberg.”

About a year before her fellowship completed, she had the talk with her husband: she wanted to go back to the one that got away: RMANJ. So they compromised: she could go for her dream job if they could stay in the city. To her, this just meant car rides alone with NPR podcasts and Billy Joel, another dream situation.

She started making inquiries about positions, and by fall 2017, she was already meeting the lead doctors here to see if ‘the one that got away’ would be a good fit. It appears the answer was a resounding ‘yes.’

“I’m so proud to be coming to RMANJ,” Dr. Fischer said. “It’s my next big journey, and I can’t wait to begin working with patients!”