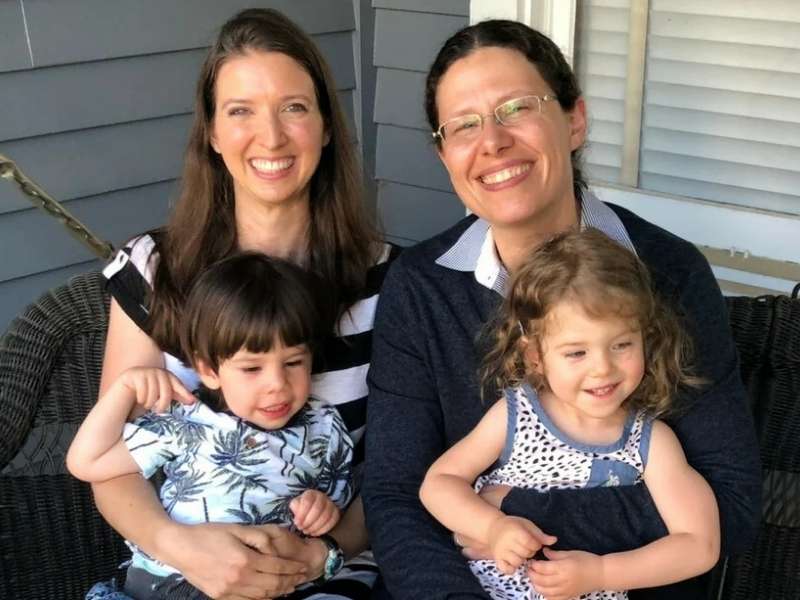 You could say Danielle Macario played hard to get. But it wasn’t intentional – romance with a woman wasn’t exactly something she had experienced before.

She was confused, overwhelmed, scared – but most of all, completely and undeniable smitten with Tanya Borsuk, a fellow scientist she’d met in grad school. At first, she chalked up her feelings for Tanya to having a new best friend, but as time passed and the pair became increasingly inseparable, Danielle realized something else might be afoot.

“I didn’t know how to feel,” says Danielle, sitting next to Tanya and their two young children in their Highland Park, New Jersey, home one recent day. “I knew I felt something.”

“I finally realized it when I was driving home from lab and I started singing in the car – I was like, ‘I don’t do that unless I’m…’”

Let’s back up. Danielle was raised in a Catholic Pennsylvania home and was always attracted to men. Anything else, frankly, was not acceptable. Canadian-born Tanya, on the other hand, describes herself as “very gay” for a long time.

The two met at a grad student association luncheon at Rutgers University in Piscataway, New Jersey in April 2006, both pursuing PhDs (Danielle in Biomedical Engineering and Tanya in Cell and Molecular Genetics). Tanya, who was the incoming president of the Graduate Student Association, knew everyone in the room, except for the woman who came in late.

“The only seat left in the room was to my right,” Tanya said, “and it was love at first sight for me.”

“I got butterflies and I got scared when I saw her, so naturally, I attacked the school president on student rights to try and make an impression.”

Aside from that, the event didn’t really register for Danielle, who was visiting the Piscataway campus from New Brunswick, where she spent most of her time. Tanya also forgot and the pair didn’t see each other again until October, during another student association meeting.

Danielle was back wanting to volunteer for the group. Tanya jumped at the offer and the two began spending a lot of time together. One evening, when they hosted some incoming grad students for dinner at a professor’s house, they stayed after everyone had left, just talking.

“By the time we looked up, the lights were off, everyone had gone, and we were in the professor’s living room alone,” Tanya said.

The rest, they say, was history – and the tables even turned a little bit. Danielle was the one who asked Tanya to “go steady,” as Tanya puts it, and the one who told Tanya she thought they’d marry.

“So I decided to make an honest woman out of her,” Tanya said, and the two married in 2009 in Toronto, Canada.

Then came another first for both women – kids. Tanya always wanted children and, after giving it some thought – and time – Danielle agreed. In 2012, the couple began the IVF process. Both scientists, they had given every element of the journey a lot of thought – Tanya would donate her eggs for Danielle to carry, and they’d choose a sperm donor with a close resemblance to Danielle so her body would choose genes from the embryo that closely resembled her own through the process of “maternal imprinting,” or epigenetics. That way, the children could be a part of both parents.

Tanya had a hyper response to the retrieval medication, and produced more than 40 eggs on her first round, none of which made it to day five. Doctors implanted a day three embryo inside Danielle, but it didn’t stick. Tanya underwent another retrieval, and two more implantations with Danielle failed.

On top of that disappointment, the couple found out their insurance company was refusing to cover their treatments because they’d just found out they were a lesbian couple.

“Danielle was three days away from implantation and they told us we had to pay up or we were done,” Tanya remembers.

They paid, but unfortunately suffered a second and third failure.

They came to RMANJ in 2014 and made an appointment with Dr. Shastri, who the couple bonded with immediately.

In summer 2014, Tanya underwent another retrieval, this time with lower stimulation and more careful monitoring, and 12 of her eggs made it to day five – of those, eleven tested genetically normal. One of the embryos implanted inside Danielle, but she soon miscarried. The next transfer resulted in a miscarriage, too.

Finally, on the third transfer – a double embryo transfer – it worked. Both embryos stuck, and Michayla and William were born February 27, 2016.

“I’ve developed a new respect for my wife,” Tanya said. “She went through 42 hours of labor – she’s an absolute warrior. In addition, I always wanted children, but she was more on the fence. So it’s been a joy watching her turn into the absolutely incredible mother that I always knew she would be.”

“I finally have life – after waiting five years and six transfers, this is what my life was meant to be.”

“I see now how much less fulfilling life would have been without our children,” she says. “I’m so proud to be their mamma, and I love our family.