Sebastian wants you to know he is a parent. And it wasn’t an easy road – but one he wouldn’t change for the world.

“I want to talk about it,” he said in an interview earlier this summer. “It’s important.”

Sebastian wasn’t always this open about his journey to becoming a dad, but after years of self-discovery, the 38-year-old is comfortable in his own shoes, proud of his family and ready to share his story in hopes the topic gets more exposure in the trans community.

So let’s start in Brooklyn, where Sebastian was a four-year old girl who felt a little funny about his pierced ears.

“I took them out and I said, ‘boys don’t wear earrings,’” he remembers telling his mother. He had several more important demands: no glitter, no pink, no purple, and no skirts. His mother thought her daughter was just a tomboy and allowed him to dress like he wanted. For a long while, he got away with it.

“The world perceived me as a little boy,” he remembered.

As a young adult, his looks and self-identification varied – he grew out his hair, then he cut it. He dated both boys and girls at first, but when he began dating girls more seriously, he was taken off guard when girls told him he reminded them of their father.

“They were expecting someone womanly inside,” he said. “I was a letdown.”

“There was no second date.”

That’s when Sebastian decided to face himself. He turned to the internet and began researching female to male 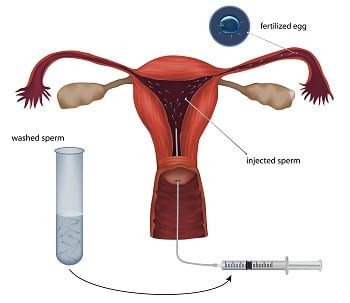 gender transition. He watched YouTube videos of trans men and started to put his own story together.

And then, like fate, he met his future wife Hannah.

“She was the first woman who ever told me I was handsome,” he remembers, “and that was when I was still presenting as a woman, so that was really the beginning of, ‘OK, how do I do this?’”

artificial insemination iui lgbt family buildingThat’s when Sebastian decided he would begin his transition. As part of that process, he knew he wanted to preserve his fertility, and in 2011 found Dr. Jacqueline Gutmann at RMA of Philadelphia to help him do that. At this first appointment at the King of Prussia clinic, Sebastian came in nervous – having stopped taking testosterone in an effort to induce his period – but soon felt relaxed with Dr. Gutmann and the staff. Although the egg retrieval procedure was uncomfortable for Sebastian, he was committed to preserving his fertility – after all, he said, it was his to do with it what he chose.

“I looked at it as, ‘no one is going to take my fertility away from me,’” he said.

Sebastian found a sperm donor and the staff at RMA of Philadelphia paired the sperm with his eggs, and froze the resulting embryos.

He and Hannah married in 2013, and, since her fertility was declining every year, the newlyweds decided Hannah should use her eggs to start their family. Through an Intra Uterine Insemination (IUI), Hannah became pregnant in 2014. The next year, Hannah and Sebastian became parents to Manuel, a “beautiful baby boy,” Sebastian said.

Last year, the couple decided it was time to grow their family, and transferred one of the embryos stored at RMA of Philadelphia. The transfer stuck, but Hannah miscarried several months later. They tried again in January this year, and Hannah is six months pregnant today.

So what has Sebastian learned?

“Parenting as a trans parent is the same as parenting as a cisgender parent,” he said. “If your kid has a tantrum, you have to figure out what to do.”

And even though Manuel only turns three this month, Sebastian has been honest about his journey with his son in hopes he can build trust early on, sharing photos of himself before he transitioned.

“I want him to feel that no matter my journey, I’m still your dad, I still created you.”

And Sebastian has one other thing he’d like to say, this time to others who might be thinking about transitioning.

“Give yourself the option of family,” he said. “When you grow up, you realize you want things you never thought you would.”